Finally I have cooked something delicious in the slow cooker! Yippee! 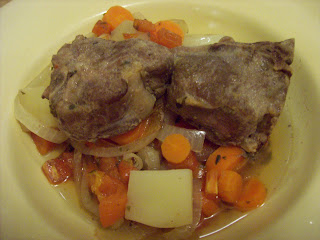 You see, I may or may not have sneaked into the Borders last time I was in the next county. It's the only Borders in a 50 mile radius. And I had a coupon. A 25% off coupon. Borders Rewards is a wonderful thing. So while I cannot confirm (because I may spend more than I possible should there) that I was in the Borders, I can tell you that I have this cookbook I really like so far. It's called Not Your Mother's Slow Cooker Recipes for Two. And whoa, there's some nice looking recipes in there.
I don't know if I've mentioned it before, but I have a small food hoarding problem. We're also buying a quarter of a cow in the next couple weeks. So getting some of the food out of the freezer would probably be a good idea. We could buy a deep freeze, but chances are we would probably fill that if we had it. Anyhow, I was poking around in the freezer and came across 4 little lamb chops. Not the Frenched fancy kind, but the more choppy kind.
So here I was with 4 little meaty pieces of lamb and a slow cooker book that didn't belong to my momma. OK, my momma never used a slow cooker and my only childhood memories of a slow cooker were for grandma's baked beans on a buffet and my Hungarian aunt's oh so delicious cabbage rolls. So I pulled out my little 2 quart crock pot. Which I'm guessing may have been a wedding present, because it still had the plastic thing on the plug. I know we got a mammoth one as a wedding present, but I can't use that with a slow cooker book for 2 people. We don't eat THAT much. Well, we could probably try, but that would be gluttony. Interestingly enough gluttony in food isn't considered one of the seven deadly sins anymore.
OK I'm off topic again. Sorry. I had my book, my little slow cooker, my lamb chops and a cold Michelob Light. And I had the perfect recipe. Lamb Chops in Beer. I popped the vegetables and chops in the slow cooker poured a beer on top and off we went to church and then to Walmart. Church in the middle of the early afternoon because after the double whammy of 14 to 18 inches of snow and daylight savings weekend, we simply didn't wake up early enough to dig ourselves out for morning mass.
After we cleaned Walmart out of a sizable chunk of groceries, we came home to a delicious smelling house and some of the best lamb chops I've ever had. And I'm entering this into a fun food blog event called Weekend Cookbook Challenge (WCC) which this month is being hosted by the oh so lovely Lisa at La Mia Cucina. The theme is Crock Pots, Dutch Ovens and Pressure Cookers.
Lamb Chops in Beer
from Not Your Mother's Slow Cooker Recipes for Two
1 medium sized onion, sliced
2 medium sized carrots, sliced
2 potatoes, peeled and chopped
1 clove garlic crushed
2 Tbsp chopped fresh Italian parsley
1/8 tsp dried thyme
4 lamb chops
2 Tbsp flour
salt and pepper to taste
cooking spray
2 plum tomatoes, seeded and chopped
1 Michelob Light
1. Combine the onion carrots, potatoes, garlic, parsley, and thyme in the crock. Sprinkle the chops with the flour and season with salt and pepper.
2. In a large skillet sprayed with cooking spray, heat the chops over medium high heat. Sear both sides, about 2 minutes total. Place them in the crock, laying them side by side. Add the tomato and pour the beer over the top. Cover and cook on HIGH for 3 1/2 to 4 hours, until the meat is fork-tender.
Posted by Mary at 7:18 PM

Another beer recipe. I love using the slow cooker. Yes we have a whole new crop of sins to worry about.Leave it to the German Pope in his efficent manner to adress these right away!

Mmm... how did you know I have two lovely little lamb chops in my freezer at this very moment? I might have to go buy me a 40 at the 7-11 to make this lovely recipe.

Lamb chops .. in beer! I read this title and was already swooning. I have an irrational fear of slow cookers and crock pots (those old explosion stories), but something like this could persuade me to try them.

Two beer dishes in a row! Beer does add a wonderful flavor to food.

I just barely saw a lamb stew recipe on another blog!!

I really need to check out that cookbook...

My friend sozzled would say that beer is the perfect food. I think you're proving her right.

Fantabulous, Mary!! I couldn' agree more with everyone else.. adding beer to ANYTHING is just a good thing! heheee!

I am also going to buy this book (don't tell my hubby either) - I can't wait!

Hugs sweetie! Thanks for participating!

Mary
Hello! I'm a math teacher, a single mom. a cancer survivor, a cyclist, an avid reader, a sewist, a bullet journaler, and a good cook. I love to laugh and to learn and I'm a bit of a geek.

you make my day award

i love you this much award